When The Skies Fall (The Gray Wars Book 2) 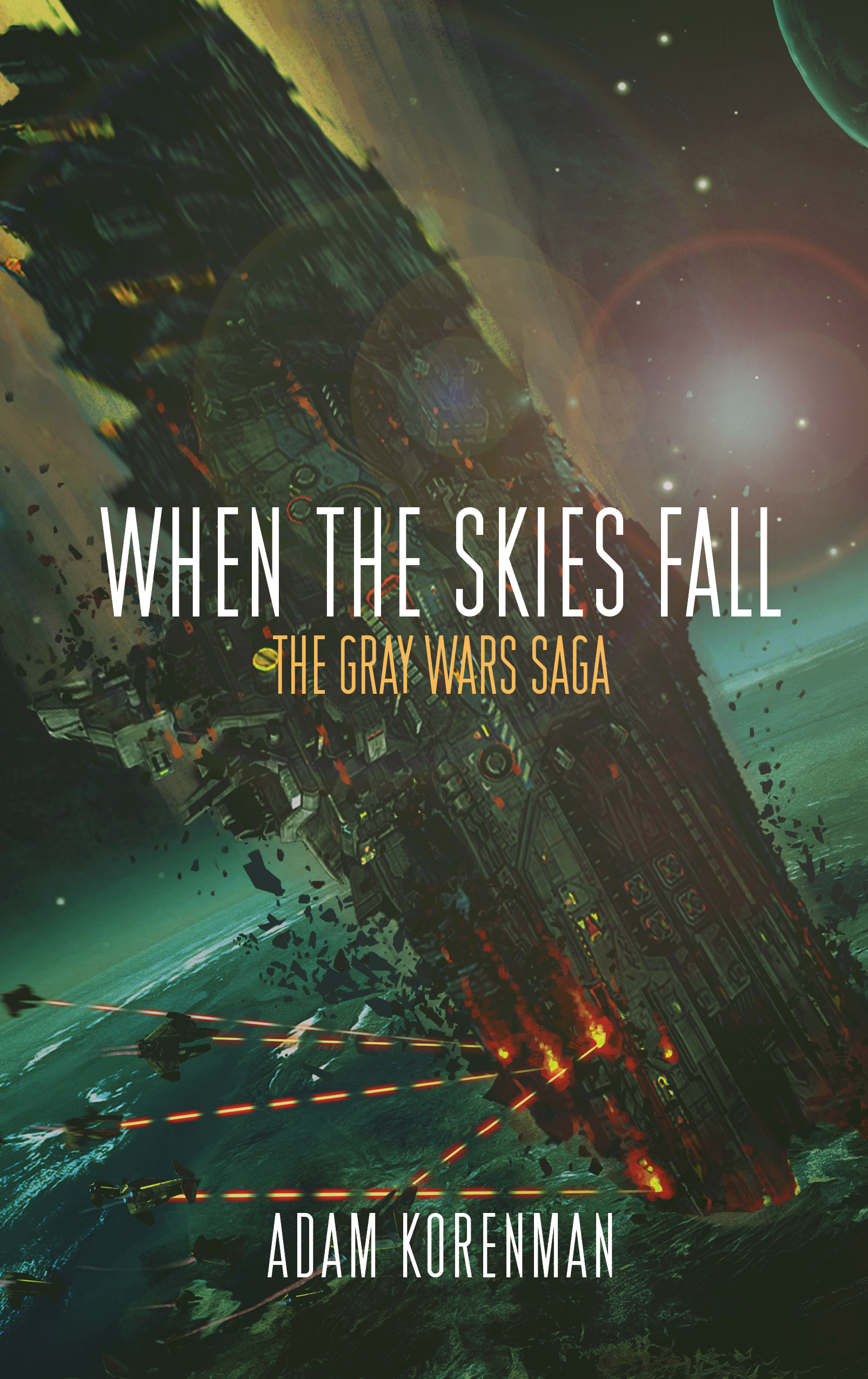 “Adam Korenman takes the reader through a time warp in a cracking military adventure three centuries from the present. He smoothly blends future technologies with lively, no-nonsense characters that carry the action in compelling runs of futuristic dialogue. His blend of science fiction and military protocol is effortless and authoritative.”
—Dick Couch former Navy SEAL and author of The Warrior Elite and The Finishing School

The Boxti bled humanity to the breaking point. Then they vanished.

Before we colonized the galaxy, the Boxti Horde had already conquered an untold number of species. When they threatened Earth, we allied with their latest victims, the Nangolani.

But a question remains: Were the Nangolani running from the Boxti…or did they intentionally lead them to our doorstep?

Meanwhile, on Earth a firebrand insurgent launches plans to bring down the Terran government, while on the training planet Omega seven recruits begin a new program that promises to turn them into super soldiers—even if it costs them their humanity.

Half a galaxy away, an ancient death machine lies dormant. Inside this unholy titan lies the power to destroy the Nangolani and the humans…once and for all.

Written by a former commander in the US Army, When The Skies Fall invites readers into the acclaimed Gray Wars Saga.

“Adam Korenman’s When the Skies Fall is a veritable all-you-can-eat buffet laid out for readers who hunger for gritty, realistic military science fiction. This book has it all. There are vividly drawn characters you hate, ones you love and, best of all, the ones you love to hate. Then, there are the warriors’ hard-charging grunts who kill the bad guys (human or alien) close enough to get hit with the high-velocity blood splatter, and the fleet warriors who do their killing from ships at a distance. And, let’s not forget the leaders: admirals, chancellors, revolutionaries, and just about anyone else who gives the orders.

“He also creates believable alien races who do believable things for believable reasons. I was especially drawn to the portrayal of the Boxti and their allies.

“Add to all of this Korenman’s own military experience, which lends an authentic, gritty verisimilitude to the whole work, especially in the banter, camaraderie, and sense of shared danger of real warriors facing a real enemy who really wants to kill them. This experience makes all of the combat—with weapons familiar to the modern reader as well as with those from our future or that are products of alien technology—totally believable and exciting.

“Korenman also performs a splendid juggling act, tossing a dozen story lines in the air and keeping them moving forward without missing a beat, eventually bringing them together for an astonishing climax that caught even me by surprise. These stories draw the reader along from one page to the next, almost breathlessly. Read this book. You won’t be sorry. I’m already itching to read the sequel.”

“Adam Korenman takes the reader through a time warp in a cracking military adventure three centuries from the present. He smoothly blends future technologies with lively, no-nonsense characters that carry the action in compelling runs of futuristic dialogue. His blend of science fiction and military protocol is effortless and authoritative.”

“For those who are still lamenting the loss of Battlestar Galactica, or maybe even Space Above and Beyond, they need look no further than Korenman’s When The Skies Fall. This is military space opera at its best. Korenman has created a universe that is epic in scope and filled it with plenty of action and political intrigue and still managed to populated it with characters you believe and care about.“

—Richard Brewer author and editor, Occupied Earth and Meeting Across the River

“When The Skies Fall is a veritable festival of astonishing, action-packed fun. It’s truly a magnificent alloy of dazzling science fiction and brutal military combat which left me breathless and literally unable to put the book down. The characters, plot, and action become inextricably intertwined into the reader’s psyche. I even dreamt about it all. Adan Korenman writes like a literary god and I will not be able to wait until his next book in the Gray Wars Saga is published after this initial grand slam.”