The Odds (The Deadblast Chronicles: Book 1) 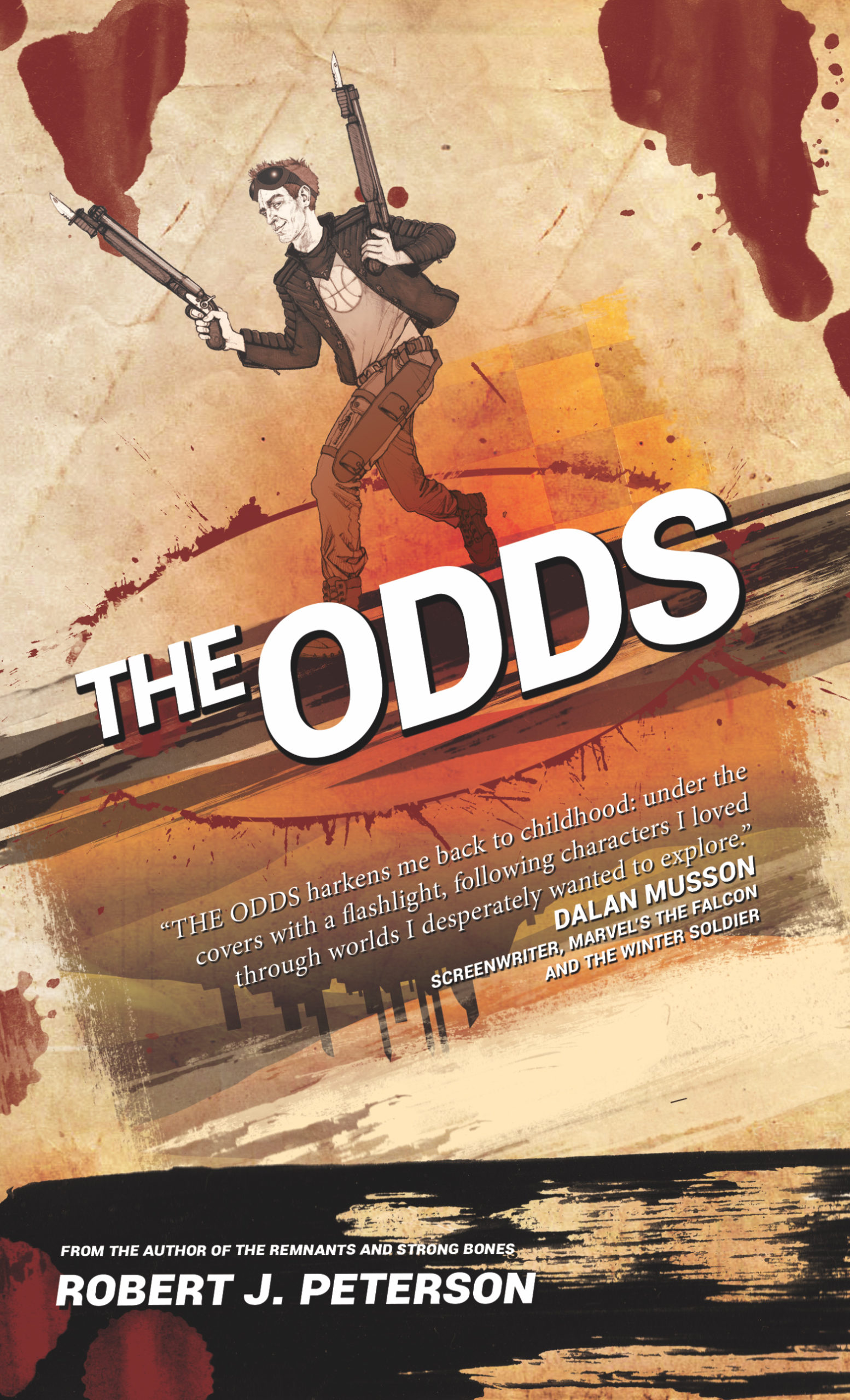 “The Odds hearkens me back to childhood: under the covers with a flashlight, following characters I loved through worlds I desperately wanted to explore.”
—Dalan Musson, screenwriter, Marvel’s The Falcon and the Winter Soldier

THE ODDS is a postapocalyptic action-comedy, an extended ode to John Carpenter’s BIG TROUBLE IN LITTLE CHINA, and the first in a four-book cycle, THE DEADBLAST CHRONICLES.

It’s been centuries since Deadblast deleted most of what we knew. All that’s left are a smattering of subterranean cities run by a ruthless cadre of bookies. We call ‘em the Odds. It’s a rough world. If you’re not freezing your ass off at night, then the sun cooks you during the day. If you’re too slow on the draw, a dreen’ll getcha. What’s a dreen?

You don’t want to know.

Here’s the deal: The man they call the redhead is back in town. He’s returned to the city of Dedrick, deep in debt and deathly ill. Wait, who’s the redhead? Well, lemme tell you—he ain’t too quick on the uptake, but his heart’s big enough to make up for it. Y’see, he’s on the outs from his family, and he’s dead-set on doing right by ‘em before he clocks out. His last hope is to win a deadly battle royale based on the rules of chess. Here’s how it works:

Two guys play a game of chess. Every time they capture a piece, two real-life warriors gotta fight to the death. The attacking piece announces their move in advance. The more powerful your piece, the less notice you have to give. The mighty queen, she can strike instantly, with just about any armament imaginable, but a lowly pawn’s got to give 36 hours notice and fight only with melee weapons. The arena is all of Dedrick. Last man standing wins the square.

But what the redhead doesn’t know is someone’s gamed the tournament to pit him against an old friend who’s now a bitter enemy. Now he’s got to make all the right moves to save his family—and beat the Odds.

“The Odds hearkens me back to childhood: under the covers with a flashlight, following characters I loved through worlds I desperately wanted to explore. From the opening pages to the “chess” thing (a brilliant sequence, worth the price of admission alone), The Odds is engaging, inventive, and fun. Peterson has a clear voice, and layers humor into his prose effortlessly. I’m really looking forward to seeing what he does next with The Remnants.”

—Dalan Musson, screenwriter, Marvel's The Falcon and the Winter Soldier

“It’s full-bore sci-fi/postapocaylptic writing where the writing is actually good, not just functional. The dialogue sizzles. The sentences are packed with radioactive imagery and double-barreled zingers. The paragraphs grab you by your eye sockets and scream in your ears ’til they bleed while repeatedly punching you in the face―and you love every second of it.”

“The best way I can describe this book is like a magnificent lovechild of Big Trouble in Little China and Mad Max: Fury Road. This novel is endlessly inventive, well written, and extremely hard to put down. I highly recommend it if you want to get your action-humor, postapocalyptic sci-fi fix on. Five very well deserved stars. I would describe it further; the twists and surprises of the plot, the looping beauty of the prose, the straight up cool of the characters but I don’t want to spoil it for you. Do yourself a favor and buy the book already!”

“I’d describe The Odds as one part western, one part Hunger Games, and one part chess. The hero is incredibly engaging.”

“Robert J. Peterson’s The Odds is a thrill ride that lovers of the weird and wondrous will be happy to sink their teeth into. Following the epic hero Eldridge on a quest to earn money for his mysterious family, this book takes us on a clever path through a postapocalyptic hellscape where even the sun is a deadly enemy. Fighting battles through a series of mini-bosses in the game of Xiang, Eldridge must finally confront someone from his troubled past to achieve his goals, with plenty of interesting and original characters along the way. Funny, violent, and imaginative, The Odds is a world that will swallow you whole and spit you out gooey on the other side.”

“The world-building in The Odds is amazing. Robert J. Peterson has created a fully developed society with political and social structures.”

“The Odds is a deliciously odd book. It’s a post-apocalyptic novel that really defies pigeon-holing. It is sort of sci-fi, sort of fantasy, sort of a farcical comedy, sort of … I really don’t know what. (…) Peterson makes it work.”

“Readers with a taste for grotesque zaniness may enjoy this venture.”

“It is a fun read. Might be good for a long airplane flight or a vacation. Calling it action packed would be an understatement. You do not have to wait long for the next battle as Eldridge struggles to survive. Character development is well done with the protagonist and you want him to come through this adventure with all his limbs intact.”